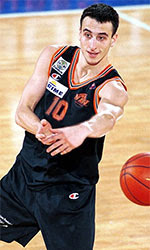 I love this guy's game. He's got Tay Prince's ability to get to the rim from the arc with 1 dribble, can move side-to-side while going full speed ahead, isn't afraid to take it straight at Shaq, and is the prettiest finisher in the league.

When SA wins the championship this year, don't be surprised if he's the series MVP.

What's The Opposite Of An Eargasm?

Bol recently took a brief respite from his vigilant quest to offend and mock all things great and small in ways both deep and profound. Read his disturbingly real report here about a new Kenny G. song. It is a cover of Outkast's "The Way You Move."

I am as upset as you are, but I've also never been more thankful that my man D. Eighch (pictured right) had the balls and foresight to snap the above photo when he ran into Kenny a couple of years back somewhere in the Yay Area.

So Gully, So Grimey

I don't have cable, so maybe folks who do and can still stand to watch Sportscenter have seen this a hundred times already, but for the rest of us... Holy Fuck.

This cat hit a 90-foot buzzer-beater in overtime to win the game. Nothing but net. Craziest thing is, the way it comes off his fingertips, it looks like a little more than luck. Dude's got touch.

Here's the proof. Some local news tool got him to re-create the shot, he hits it on his tenth try (calling it in the air,) and the first eight aren't that far off.

All About the YAC

The Longhorns are going to miss Cedric Benson quite a bit next year.

I do not miss cheesy Texas white-guy blues-rock at all.

This guy couldn't hold Gene Kelly's jock, but it's still a dope spot.